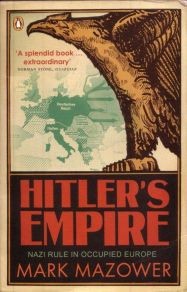 s:1212:"'REMARKABLE . . . PROVOCATIVE . . . AN IMPORTANT NEW BOOK' ADAM TOOZE, SUNDAY TELEGRAPH 'A BRILLIANT ACCOUNT' DAVID CESARANI, INDEPENDENT Hitler's empire was the largest, most brutal and most ambitious reshaping of Europe in history. Inspired by the imperial legacy of those such as the British, the Third Reich cast its shadow from the Channel Islands to the Caucasus and ruled hundreds of millions. Yet, as Mark Mazower's groundbreaking new account shows, it was an empire built on an illusion. From Hitler's plans for vast motorways crossing an ethnically cleansed Russian steppe, to dreams of a German super-economy rivalling America's, Mazower reveals the lethal fusion of mass murder, modern managerialism and colossal incompetence that underpinned the Nazi New Order. Ultimately Hitler's empire ended up consuming its own, leaving destruction in its wake and finishing not just with the downfall of Germany, but an entire continent. 'A first-class account' RICHARD OVERY, LITERARY REVIEW 'Brilliant . . . a must for anyone who has a serious interest in the dreadful Third Reich' JUSTIN CARTWRIGHT, SPECTATOR 'A stunning survey . . . breaks new ground' DOMINIC SANDBROOK, DAILY TELEGRAPH, BOOKS OF THE YEAR";